Diesel is toxic for London

In this article I will give a brief history of the non-diesel bus types which have been in operation on London Bus services and explain how dangerous their diesel fumes are.
Trolleybuses
Trolleybuses first began operation in London on 16th May 1931, it was the largest Trolleybus network in the world, serving 68 routes and having a maximum fleet of 1,811 trolleybuses.


They were one of the main non-diesel buses which operated on London Streets, but sadly they were removed in stages which began in 1959, the final withdrawal being completed by 1962. The Trolleybuses were replaced by diesel buses which in most cases were the AEC Routemaster buses. For more information on the withdrawal of the trolleybuses, see the Trolley Bus Replacement Program 1959 – 1962, here.
The question is, did they remove them because they were too costly to run and maintain, including the overhead lines? If the reader knows the answer to this then please drop me a comment below the article.
Hybrid Buses and New Routemaster
Hybrid electric buses use a combination of an electric battery pack and a diesel engine to provide power. The first route which began its operation of hybrid buses was route 360, which first started on March 2006 using six Wrightbus Electrocity single-deckers. Then in October 2006 the first Hybrid double deck bus was unveiled, again manufactured by Wrightbus. They eventually first entered service around 2008.
Forward wind now to 2011..... TFL unveil their own flagship bus type called the New Bus for London, which was later changed to New Routemaster. The first prototype entered service on route 38 in late February 2012. The first full conversion occurred in June 2013, the first route being Route 24.
Regardless of which bus types, including the Enviro400 Hybrid, the buses still emitted diesel fumes which they reduced by charging the battery pack which uses the motor to accelerate the bus.
TFL claims that the New Routemaster fleet (including the extra 200, from 600) will cut CO2 emissions by 27,500 tonnes a year by 2016. Compared to the conventional hybrids, the New Routemaster is bought and owned by TFL and leased to private companies for operation.
However they want to dress it up, for example, by calling it the“greenest bus”, it still emits CO2. The 'greenest' bus would be emitting 'zero' emissions. The hybrids however, are the first stage to cutting emissions.
What people don’t realise is that the New Routemaster is basically a hybrid bus with two staircases and three doors.
Currently there are 1,200 hybrid buses roaming the streets of London.
Ultra Low Emission Zone
TFL proposed in a consultation that they wanted to impose a zone where selected vehicles are not allowed to enter into the Central London zone, it would be in conjunction with the Congestion Charge. TFL is proposing that all double deck buses will be hybrids and single deckers are to be zero emission which would be hydrogen or electric buses.
Hydrogen Fuel Cell Buses
The original fuel cell bus was introduced in 2004 as part of a trial to cut emissions. It started operation in January 2004 on route 25, with two buses in operation each day, then they moved over to route RV1. They stopped operating on route RV1 in 2007. There is a video report of the fuel cell buses in London. There were plans for London to have 60 prototype Hydrogen buses which would have cost London about $20 million (USD according to the reference) for the rollout, but that was back in 2008.
The Hydrogen buses returned to London in late 2010, these buses are Wright Pulsar 2 Hydrogen-powered and currently there are eight of them for route RV1. The Route RV1 has a Peak Vehicle Requirement of 9 buses, so a minority of the buses on the route are operated by Diesel buses.
The hydrogen buses are one of the top zero emission buses which only emit vapour. But during the 2012 Olympics the buses had to be removed because the Olympic Delivery Authority (ODA) required that no hydrogen be stored at the buses' refuelling site in Lea Interchange in Stratford between July and mid-September 2012 "in the interests of security." Eventually, after September 2012, they returned back into service. TFL have done a video report of the Wrightbus Hydrogen buses.
So TFL can expand the fleet of hydrogen buses, but they do require garages to have facilities to refuel hydrogen buses.
Electric buses
Currently there are only eight Single Deck electric buses operating on London Bus routes.
Two of these operate on Route 507/521 which are BYD eBuses, four operate on route H98 which are Optare MetroCity Electric and currently there are two operating on route 312 which again are Optare Metrocity Electric.
There is still no news on the Alexander Dennis Enviro400 Virtual Electric bus which is due for Route 69. When this bus finally arrives it will be the world’s first electric double deck bus to enter in to London Bus service.
Recently, Arriva London retained the contract to operate route 312 completely,  using Optare MetroCity Electric buses which will make it the first London Bus route to be fully operated by Electric buses.
Hopefully TFL is going to speed things up and start converting more routes to electric buses which makes the future look rather interesting.
Diesel facts 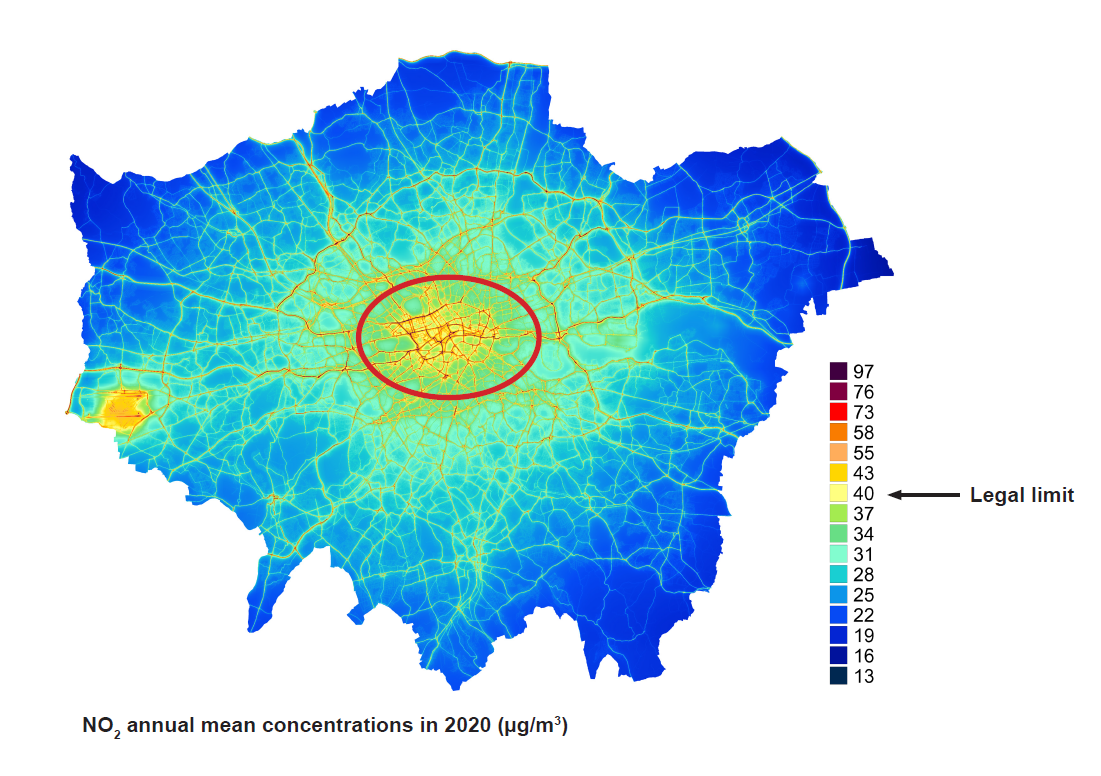 Since the majority of the London Bus fleet are diesel buses, with the newly delivered buses having Euro 6 engines, Londoners are still at risk from the poisonous fumes that are emitted. Diesel fumes carry serious health risks and the World Health Organization (WHO) reports they “are a major cancer risk.” No matter if the bus is hybrid or fully diesel, they still emit diesel fumes.
Exhaust fumes are extremely dangerous and can seriously injure and even kill people who are exposed. Exhaust fumes from heaters, for example, contain carbon monoxide.
Carbon monoxide is produced by internal combustion engines (eg cars, trucks, forklifts), gas heaters, furnaces, kilns and other equipment, as well as in some manufacturing processes. Many workers in many industries are potentially exposed to this hazard.
The exhaust gases which are discharged from engines run on diesel contain several constituents that are harmful to human health and to the environment.
World Health Organization's International Agency for Research on Cancer concluded in June 2012 that diesel engine exhaust is a Group 1 carcinogen – that is, carcinogenic to humans. Click here for more information on Diesel Exhaust fumes.
The amount of pollutants from diesel exhaust fumes, in particular its sulphur content, have been reduced over the last few years, and engines on newer cars are designed to burn fuel more efficiently, reducing emissions. However, the IARC says it is not yet clear how these improvements translate into any changes in the impact of diesel fumes on human health. Existing fuels and older unmodified vehicles will take years to replace, particularly in less developed countries where regulations are less stringent, the IARC says.
The WHO does not specify the level of risk posed by different carcinogens, or the risk posed by different levels of exposure. However, for most carcinogens, the higher the exposure, the greater the risk of cancer.
Dr Christopher Portier, chair of the IARC working group, said that while the scientific evidence that diesel oil exhaust caused lung cancer was ‘compelling’, the impact on the wider population who are exposed to diesel fumes at much lower levels and for shorter periods of time, is unknown.
For more information see the following links:
http://www.ohsrep.org.au/hazards/chemicals/exhaust-fumes-how-dangerous-are-they
http://www.nhs.uk/news/2012/06june/Pages/who-classes-diesel-vehicle-exhaust-fumes-as-carcinogen.aspx
http://oehha.ca.gov/public_info/facts/dieselfacts.html
http://www.ehhi.org/reports/exhaust/summary.shtml
Conclusion
In my opinion, I think TFL should invest far more in the introduction of Electric buses. One electric bus driver for route 312 said “Driving an electric bus is an exciting time for the drivers on the 312, as the electric buses are the future.” He also says “they are very smooth and efficient and they pick up speed easily. They’re also comfy to drive and the passengers find them very comfortable as well.”
I agree, and even though the electric bus may be costly they do benefit the passengers as well as the environment. With TFL still purchasing and converting more of their Central London routes to hybrid New Routemaster operation, it’s time that we saw hundreds of electric buses on London roads.
As with Brighton where the council introduced the Low Emission Zone for the town centre, it required bus operators to have buses in Euro 5 or higher in order to emit low emission fuel. I think that idea should be spread across Britain as the Councils can regulate what type of buses enter the affected area.
With deregulation of buses around Britain, there’s a news report back in 1995 where one town in Oxford has their roads full of buses. People complained about the obnoxious fumes, which are bad, including people with asthma. We see the same thing in Central London, in Oxford Street for example where the road is usually full with buses, routes 7, 10, 13, 23, 73, 94, 197, 137, 139, 189 and 390 use hybrid buses whilst other routes use diesel buses.
Thankfully though, London Bus services are regulated which means that the operator has to operate using a specific bus type and hopefully TFL is going to invest more money to speed up the rollout of electric buses which London desperately needs for its polluted city.
It's been a long time coming but I think with 'environmentalism' becoming increasingly more popular the pressure is on to see our Capital city serviced with clean, emission free Electric Buses.
Don’t forget to follow me on Twitter, Tumblr, Pinterest and Google Plus which is @CLondoner92
References:
https://consultations.tfl.gov.uk/environment/ultra-low-emission-zone
https://web.archive.org/web/20040803201930/http://www.transportforlondon.gov.uk/buses/fuel-cell-buses.shtml
http://web.archive.org/web/20070513071814/http://www.tfl.gov.uk/corporate/projectsandschemes/environment/2017.aspx
http://www.edmunds.com/autoobserver-archive/2008/08/london-mayor-spikes-order-for-60-prototype-hydrogen-fuel-cell-vehicles.html
http://www.londonbusroutes.net/photos/RV1.htm
http://www.autoblog.com/2012/07/25/londons-hydrogen-buses-grounded-during-olympics-due-to-security/
http://www.instituteforsustainability.co.uk/uploads/File/Zero%20Emission%20Buses.pdf
http://www.clean-fleets.eu/fileadmin/New_Bus_for_London_Case_Study_for_Clean_Fleets_-_final.pdf
https://en.wikipedia.org/wiki/Trolleybuses_in_London
Note: I know I've linked to a few Wikipedia articles and they can be an unreliable source but if you scroll down to the ‘References’ section, you'll find more information relating to the topic.