London Buses were on the verge of being deregulated

During the early 1990’s, London bus services were being privatised, and came close to be 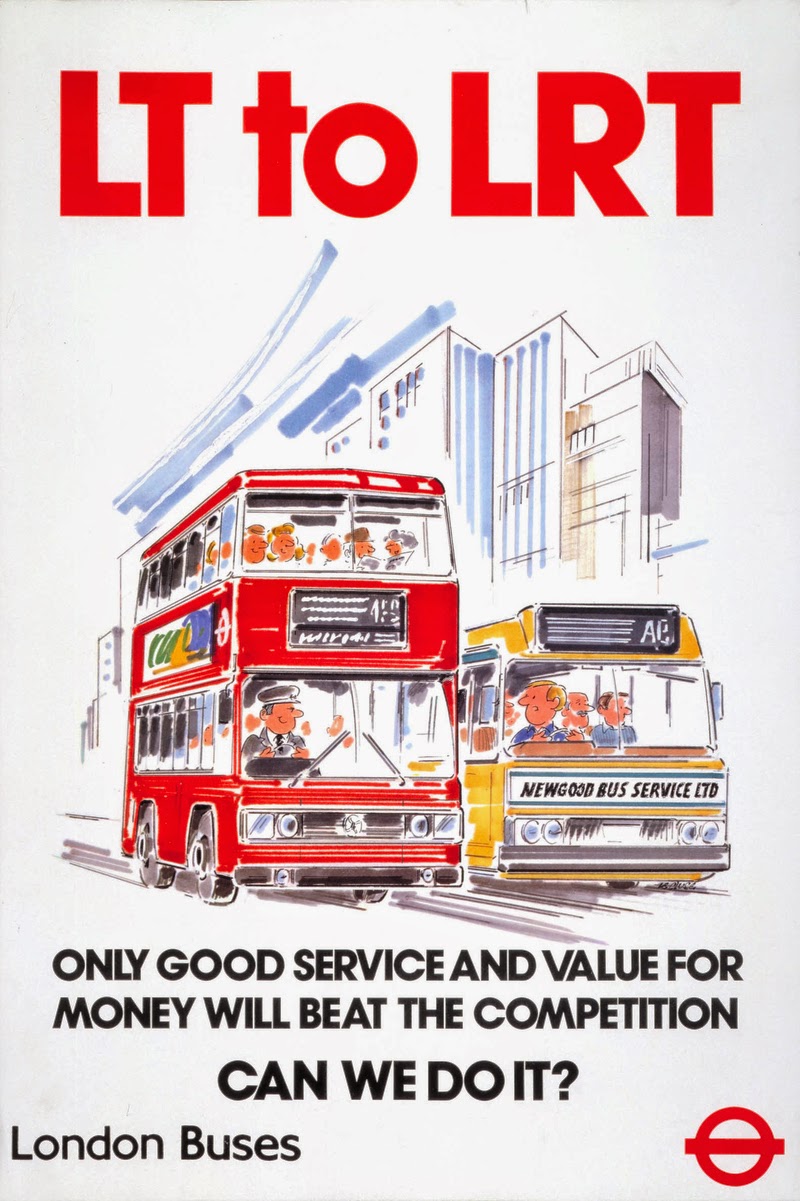 deregulated by the government. 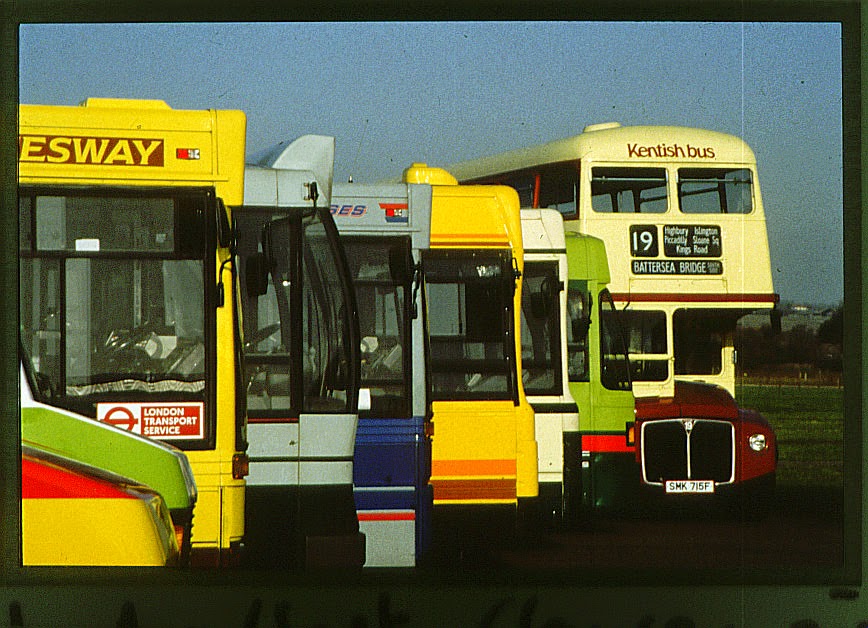 On the 16th December 1993, in the House of Commons debate, Steven Norris said:
“I am aware of the support which has been expressed for the retention of a red livery for buses in London. LT has no current plans to require private bus operators to conform to a standardised bus livery.”
So this means that buses operating on London Buses tendered routes can have their own liveries which mean the buses can be in any colour. One of the notable tendered routes in Central London with non-red buses is route 24 with Grey Green livery, and route 176 with London & Country Green livery.
Upon selling off London Buses Ltd. subsidiaries, he said in March 1994 “I have therefore decided that the purchasers of the London Buses' companies will be required to retain the red livery on the routes which they operate in Central London.”
Most notably, Stagecoach bought East London and Selkent from London Buses Ltd. They retained the all red livery on their existing buses.
In reality, newly tendered routes in the Central London area had to be 80% red which came in to force in 1997 after lobbying from the tourist board. Following this, the rest of the bus services in Greater London started to be 80% red in early 2000. Then in 2011 all new buses had to be 100% red with the London Buses roundel on the side. This shows that London Buses have been regulating over the livery of the buses that operate on London Buses tendered routes.
What does the government claim regarding the advantages of London Bus deregulation?
I'll paste some quotes from various Members of Parliament who expressed their positive thoughts towards deregulation of London Buses.
Malcolm Rifkind said on July 22 1991, in a House of Commons Debate, "The Government believe that deregulation will bring greater freedom of choice to both bus operator and passenger. Operators will have an incentive to provide the services the public wants. The operating environment will ensure that no one operator has an unfair advantage over another. The passenger will benefit from an increased number and variety of services. And there will be safeguards to ensure the provision of socially necessary services, and of adequate bus facilities."
This means that the operator has to invest more for services from their own profits.
John Marshall said on March 11th 1991, House of Commons debate,
“We will give Londoners the benefits of deregulation of buses which have been enjoyed by the rest of the country. If we could deregulate London buses, there would be many more routes in the suburbs. Some people say that it would lead to more congestion. I do not agree for one minute that someone will run a route from Barnet to Bermondsey, but there would be many more local routes, which would benefit commuters in London and would lead to a better transport system for all the citizens of London.”
Extra routes means more traffic congestion, increased traffic means more pollution and this is bad for the environment and peoples' health.
On April 19th 1993, he said, “privatisation and deregulation of London Buses will lead to innovation and the introduction of new services for the benefit of London's travelling public.”
Usually the local authorities introduce new services because deregulated operating companies tend to make new services against the competing operating company.
Roger Freeman on 17th February 1992, in a House of Commons debate said, “The reason for deregulation is simple. It is to enable other bus companies to introduce additional services in greater London—initially, we believe, in the outer suburbs. We think that that will be of advantage to Londoners, because they will have morebus services to choose from. Although there might be some initial disruption of services”
Disruption of services? It could happen with the amount of deregulated buses operating on one road which means the increase of congestion which is a cause of disruption. Especially with the incidents of ‘bus wars’ which occurred with the bus firms outside Greater London.
My conclusion
If bus deregulation had of happened in London, we would have seen a different atmosphere with the bus services in London.
Today, London Buses is under the control of Transport for London and we have many features like:
·         The iBus which displays the names and announces the bus stops.
·         Cashless buses where you can only use a Paper Travelcard, Oyster and Contactless bank cards to use the bus, cash fares will not be accepted on London Buses anymore.
·         Faster boarding enabled, all thanks to the smartcard system implemented in year 2003.
·         Low floor buses which have fully served London since late 2005 which makes it easier for people with walking difficulties and also enables wheelchair users to use the bus.
·         Flat fare of £1.50 (2015 price) for all London Bus services with a daily price cap of £4.40.
·         Buses fully painted red again, yes, an operating requirement from TFL to make all new buses 100% red.
·         More hybrid buses than any other city in Britain. London currently has over 1,200 hybrid buses, a fraction of them are Hybrid New Routemasters.
·         The countdown system where bus users can check their phone to see how long their next bus will be, this is also seen at bus stops with their departure boards.

Londoners were very lucky that London Buses were never deregulated, although it did come close. Some enthusiasts like competitive tender as it makes it more interesting because it creates more history over private operating companies that operated the individual London Bus Routes.
If you want to imagine what deregulated buses are like for a city then take a look at the bus services from Tyne and Wear, Birmingham, Liverpool and Manchester. Over the years it has calmed down for them because the bus operators realise that they are creating losses by providing too many services.
There are bus operations which are still owned by the public, most notably Lothian Buses from Scotland which is owned by three councils and Nottingham City Transport which is owned by Nottingham City Council, 5% of their stake is owned privately by Transdev. These are known as Municipal bus companies, there are 12 of them left in Britain.
Regulation is starting to grow back, case in point is where Brighton enforced the Low Emission Zone which requires bus operators to have buses with Euro 5 emissions or greater in order to cut emissions and pollution. Tyne and Wear bus services is soon to be controlled back to the Tyne and Wear council under the Quality Contracts scheme.
Before London Transport was formed in 1933, LGOC (London General Omnibus Company), who were the first main bus operator back then, started to use route numbers which occurred in the year 1906. Then in 1912, LGOC was brought by Underground Group. Rolling on towards 1924, under the London Traffic Act, the Metropolitan Police were given the authority of allocating route numbers, which all buses had to carry. This is why independent operators used general route numbers, along with suffixes from the alphabet to denote branch routes.
If the buses in London were deregulated, the London Bus Executive would have to maintain control over the operators, there would be limited accessibility because the operator would prefer to use second hand buses, just like the private operating companies did outside of London.
What is most important to have is regulation to control the emissions of what bus types can operate in the affected areas. I have already written about diesel being toxic but bear in mind that deregulation would be even more dangerous to London in terms of emissions with the pollution levels increasing at double the rate.
The main purpose of having a public transport system is to enable people to travel from A to B around the city. If deregulation did happen in London, it would mean that London may be the only major city in the world with deregulated bus services. The operation of London Buses is not the only TFL subsidiary which has been privatised. The operations of London Overground, Docklands Light Railway and Tramlink were also tendered off to private companies as well.
Private bus operating companies can form their own routes in Greater London, but they need to get a London Service Permit which has a fee for new applications of £150 including VAT, you can find out more information on that here.
The reason I have written this article is because not many people know that London Buses was on the verge of deregulation, so this is important as it is part of London Transport’s history. If my fellow readers could share my article by clicking on the social media button below, I would be grateful.
Don’t forget to follow me on Twitter, Tumblr, Pinterest and Google Plus which is @CLondoner92