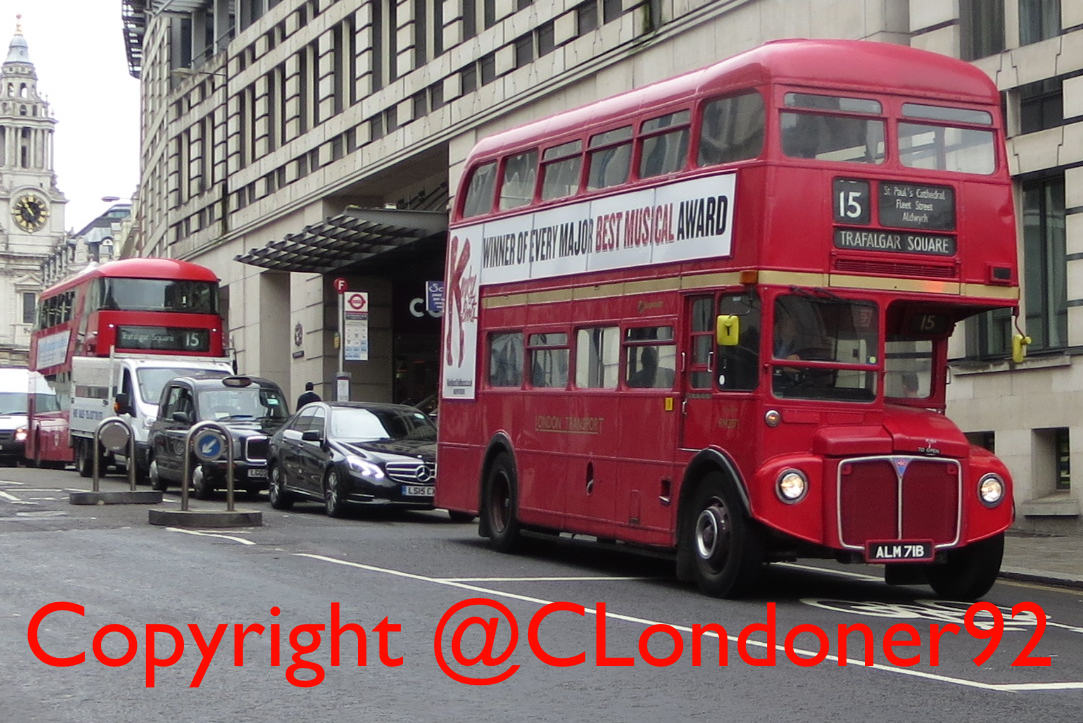 Not many commuters and tourists are aware that the vintage ‘AEC Routemasters’ are still operating on route 15 between Charing Cross and Tower Hill/Tower of London.

TfL haven’t given much publicity to the AEC Routemasters on route 15, but they do mention them in the last paragraph on the New Routemaster page on their website and also the ‘where can I use contactless’ page.

When I looked at the route 15 timetable at the Tower Hill bus stop, below the timetable and highlighted in red, I noticed it said “Heritage Routemasters operate additional journeys daily to Trafalgar Square between 0935 and 1835. These buses cannot carry wheelchairs.”

I really do think these buses need more publicity to let tourists and commuters know that they can still ride on the classic Routemaster buses on route 15 between Charing Cross (Trafalgar Square) to Tower Hill/Tower of London. The service is contracted to Stagecoach London at a cost of £1,222,000 per year.

The route 15H service runs every 20 minutes during the week, including weekends; you can view the timetable in PDF format here.

Anyway, here are some videos of the AEC Routemasters in action on route 15!

Yes, they sound different to the original because they were refurbished during the early 2000’s by Marshall.

Below are some more articles relating to the AEC Routemaster bus:

10 year Anniversary of Route 159 AEC Routemaster withdrawal
10 Years of route 15H (contains a fleet list and brief history of the service.)
Consultation response on Route 15H
London Buses 'Route 15' to convert to New Routemasters
End of the line for AEC Routemasters on Route 9

We need to start supporting the bus by making use of it. You can find the bus on London Vehicle Finder by typing ‘15’ into the search box, or by typing in the bus stop code which you can find on the route 15 bus stops between Charing Cross and Tower of London; you can also see ‘RM’ on the fleet code which identifies the Routemaster bus.

Please spread the word and share this article around on your social media and by any other means you may have as there may come a time when TFL decides to withdraw the iconic bus once and for all. You might also remember back in September 2016 when TFL scrapped conductors from the New Routemaster buses in order to save £10 million per year.

This is why it’s important to make use of the service instead of using the three-door two-staircase hybrid New Routemaster bus. Since TFL aren’t giving much publicity to that service, it’s our duty to spread the word ourselves!

As always, I invite you to follow me on Twitter and Google Plus which is @CLondoner92
Posted by CLondoner92 at 16:18