The Son Of (New) Routemaster with 2 doors 1 staircase! 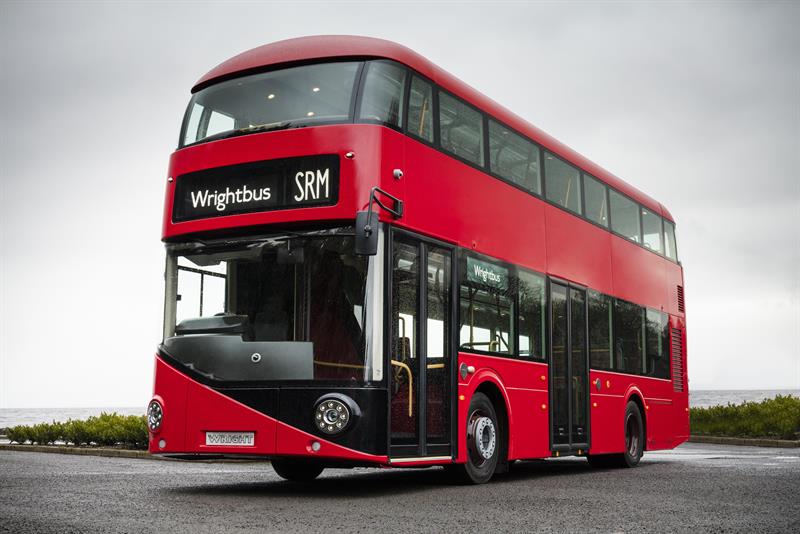 At last, finally a two door one staircase design of the New Routemaster has arrived!

It was first unveiled at Covent Garden on 16th March and the initials ‘SRM’ are believed to stand for 'Son of Routemaster'. The newly designed bus is manufactured by Wrightbus whilst the chassis is made by Volvo. The company who designed the original New Routemaster bus was Heatherwick Studios.

Transport Engineer has produced a report on the new bus:

A new version of the Wrightbus double decker – inspired by the New Routemaster – was unveiled yesterday (16 March 2016), based on the Volvo B5LH Euro 6 hybrid chassis.

Dubbed SRM, the new bus body retains the look of the New Routemaster – more than 720 of which are currently in service around London – but has an overall length of 10.6m – 0.7m shorter – and has two doors and a single staircase, rather than three doors and twin staircases.

Ian Downie, managing director, sales and custom care at Wrightbus, explains that the vehicle is the result of TfL’s (Transport For London) requirements. 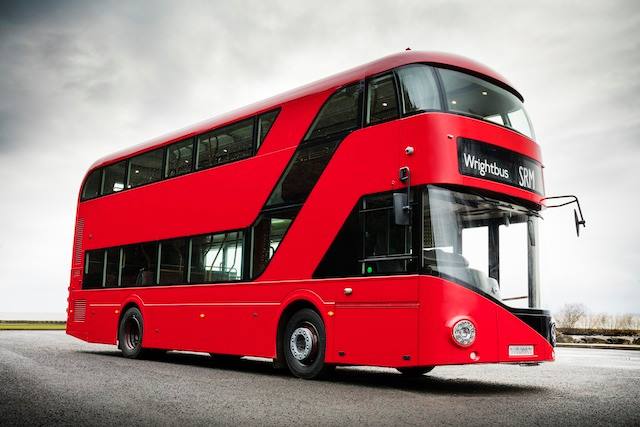 “TfL presented us with a challenge to develop the iconic look of the Routemaster with a shorter overall length, single staircase and twin doors, which could be built on an alternative driveline combination,” states Downie.

“The look of the side structure, roof and floor are the same as the original New Routemaster, along with a number of other important design features – to preserve the style of its iconic predecessor,” he continues.

“From a body perspective, we also sought to achieve a high level of commonality of spare parts, so that the aftermarket support can be optimised.”

Downie says that, aside from the chassis, the main difference between the Routemaster and the SRM is the moulded fibreglass dome.

“This is an additional structure to the rest of the vehicle, whereas on the New Routemaster it is part of the structural integrity of the bodywork,” he explains.

“We are happy that our partnership continues to be developed in this way,” states Phil Owen, commercial sales director for Volvo Bus UK & Ireland.

“We are delighted and honoured that RATP Dev London have placed the order for the first vehicle.”
“The continued partnership between Wrightbus and Volvo Bus has delivered yet another great product and Wrightbus has worked hard to deliver against the challenges laid out to them by TfL,” confirms Richard Hall, managing director for RATP Dev London. 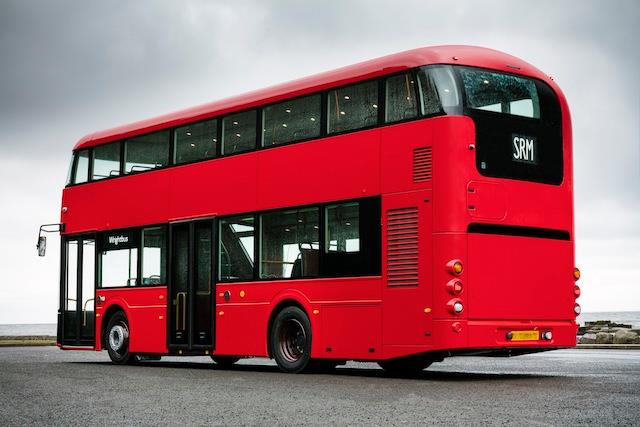 “This latest addition to the Wrightbus/Volvo Bus partnership will form an important part of our drive to provide the best in passenger transport around our city,” adds Leon Daniels, managing director for surface transport for TfL.

“Wrightbus has certainly risen to the challenge we set them, which has resulted in the state-of-the-art bus we have here today.”

The first order for RATP Dev London is for 56 double deck buses, with six being the new SRM and the remaining 50 with the Gemini 3 body style.

Also, six of these SRM’s are bought and paid for by RATP Dev London for route 13, so if you thought these ‘New’ 2 door 1 staircase Routemasters were paid for by TFL you would be wrong as operators buy them.

Why are they bought by operators? Bus and Coach explains:

Leon Daniels notes that the new SRM will be bought and owned by operators rather than TfL, pointing out that the New Routemaster had been acquired by the public body only because of the fact that a three-door, two-staircase model would not be applicable outside the capital and therefore a less attractive proposition for fleets which have the need to cascade vehicles in their second life.

Ian Downie points out that the second life of the vehicle has also been taken into consideration with the inclusion of a conversion kit to take the bus from two doors to one door if required. A provincial version with a single-door is also in development.

Official Visions have also written a short report on the successor to the New Routemaster on Twitter.

The registration of the bus is believed to be LJ16EXD. The fleet number of this vehicle is unknown.

I wrote in my previous article about the Mayoral candidates not buying any more 3 door 2 staircase New Routemaster buses. The New Routemaster has evolved, we have the Enviro400H City which is manufactured by Alexander Dennis as well as the Volvo Wright SRM and at least those new state-of-the-art buses will be bought and paid for by the private operating companies for their contract requirements. Fear no more, the evolution of the London Bus has happened! and the next route to have Enviro400H City's will be route 26, and those buses are bought and paid for by CT Plus. 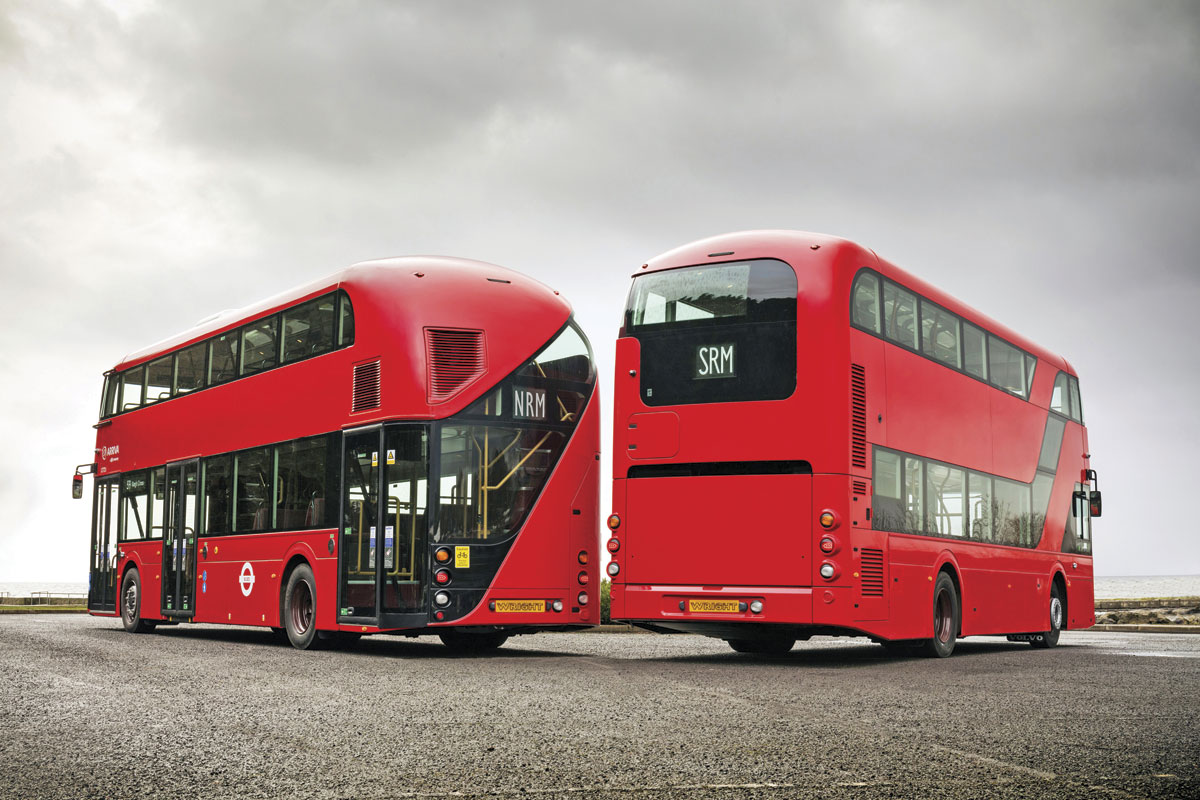 In my personal view, if they had of unveiled the SRM a lot earlier then there wouldn’t be any need for the extra New Routemaster orders. Also, there are still no updates on the Shorter New Routemaster bus with 3 doors and 2 staircases.

The future looks bright for London Buses as we witness the designs evolving year on year. The New Routemaster rollout comes to an end in 2017 with 1,000 of these 3 door 2 staircase buses. Hopefully we will see more of the new style buses in the outer London areas.

In other news, Reading Buses have announced a £1.3 million order with Wrightbus for six of their Streetdeck models which contain the glazed staircase based on the New Routemaster design. Reading Buses is a municipal bus company which is owned by Reading Borough Council.

Please share this article as this news hasn't been reported by the mainstream media yet. The Enviro400H City and SRM deserve to have more publicity as they are competitive, state of the art buses.

Some of my articles may feature excerpts of articles and press releases from various websites (such as magazine sites, transport authorities, transport companies, manufacturers etc.) which is shown for research and review purposes under the UK Government's guidance on exceptions to copyright.