The LT1000 is used by RATP-Dev London United for their route 267 contract which is fully served with New Routemaster buses; this marks the end of an era for the New Routemaster rollout!

Here’s a photo of the LT1000 by @RandomBusesGirl 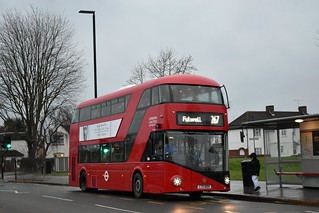 The total cost of the New Routemaster project is £346 million - a massive figure for a three-door, two-staircase hybrid bus.

The spin off New Routemaster buses such as the Alexander Dennis Enviro400H City and Wright SRM (two-door, one-staircase) with the Volvo B5LH hybrid system was purchased by private bus operating companies for their London Bus route contract. TfL won’t purchase these buses as it’s up to private bus operating companies to purchase them at their choice.

There are only 6 Wright SRM with Volvo B5LH which are used by RATP-Dev London Sovereign for route 183, you can view the fleet on London Vehicle Finder

Currently there are no new purchases for the Enviro400H City and Wright SRM by private bus operators.

I published an article titled ‘The New Routemaster opens the door for more stylish conventional buses’ which is worth a read to learn more about the radical changes to bus designs.

Here are some more New Routemaster articles which I’ve published over the years:

Some of my articles may feature excerpts of articles and press releases from various websites (such as magazine sites, transport authorities, transport companies, manufacturers etc.) which is shown for research and review purposes under the UK Government's guidance on exceptions to copyright.